All writers are readers, and I am no exception. I’ve been reading since before I was three years old, and have always found pleasure between the covers – and, in more recent years, flicking the screen of my Kindle.

As much of the reading I do is for academic and research purposes, it’s necessarily quite harrowing – about child sexual abuse, rape, and other abuses – so I have learnt to mediate that with fiction, memoir, and ‘enjoyable’ literature. I’m getting better at writing reviews, and I will post the latest ones on this page – while more of them can be found on my goodreads page.

I decided to listen to this because I have enjoyed several of Louis Theroux’s documentaries on Netflix. I was always fairly sure his gormless gombeen act is just that – an act. This was confirmed for me by this book, but I learnt a lot more about Louis Theroux than he revealed in any of his documentaries.

One of the first things is that he’s a crashing bore who is needs you to know how privileged he is. It goes a bit like this:
‘I’m fabulous. I’m very privileged. I have lots of privileged. I was always privileged. Like this, and this, and this. Oh! And that bit of privilege that I’d forgotten to tell you about, so let me tell you about it now. I’m also very lucky. But my luck is borne of my privilege. Also, I’m very smart. I got a First in History at Oxford because I’m brainy. A few other people got Firsts, but mine was the best First.’

And if you didn’t get it the first time, you’ll be reminded, repeatedly, that Louis Theroux has a classical education, and it cost a lot of money. On television, his ex-wife described him as a narcissist and she may well have been right. He forgives her for saying that because she was probably hurt and upset.

There was a lot in this book that made me very uncomfortable. For example, he admits to gaslighting some of his guests/subjects. He admits that he deliberately pushed others in the hope they would react – and sometimes they did.

What made me deeply uncomfortable, however, were the thousands of words he devoted to Jimmy Saville. He talks of having a ‘grudging respect’ for the paedophile, of how he made up a spare room in his house for Saville. He talks about them being friends, even after he’d confronted Jimmy Saville with the rumours of Saville’s child abuse. I was perturbed by the fact that he was happy enough to take Saville’s word for it when he denied he was a child abuser and rapist.

The microphone loves Theroux, and he is a good mimic. At times, though, I did wonder if he was mimicking, or mocking, the people he was imitating.

I love memoirs, biographies and autobiographies – I love that I learn more about the writer than I knew before. Sadly, there’s very little of that in this book. Theroux’s writing is an act of self-indulgence, with no real insight or awareness. Introspection is only evident when talking about his relationship with the mother of his children.  But I absolutely cringed at the line ‘Nancy had bounced back – she’d lost her baby weight.’ Ugh.

Theroux became a documentary maker because he wants to be famous. He wants to be a celebrity, and he doesn’t care how. He uses people for his own glorification – not from any desire to get at the truth.

He tries to get philosophical in the epilogue, but it falls too far short of the mark to be in any way meaningful. 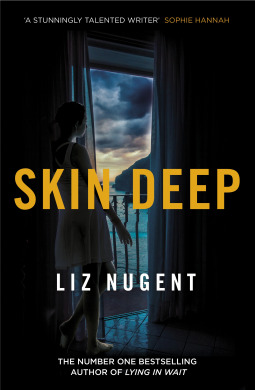 In the interests of full disclosure, Liz Nugent and I are connected on social media, I’ve met her a couple of times at literary events in Dublin, and I think she’s an absolutely lovely person. That said, I always do my absolute best to comment on books that I read / listen to with complete honesty. If I felt I couldn’t be honest, about a book written by someone I like and admire, I wouldn’t say anything.

Anyway, that aside, let me tell you what I think about this book. It’s brilliant.

For the first time in a long time, I stayed up for hours past my bed-time to read a book. What I loved most about Skin Deep was that – while it is most definitely a thriller – I wasn’t hit over the head with that fact on every page. You know the way some books read in such a way that you are constantly being reminded of the genre? This isn’t one of those books. I was reading an incredibly well written book that was populated by characters I could believe existed. Liz Nugent’s ability to write her characters as flawed, but sympathetic, meant I was able to enjoy them as realistic representations; rather than puppets who were manipulated by the writer for the purpose of Story.

As an Irish person reading a book written by another Irish person, and largely set in Ireland, I am privy to firsthand knowledge of the Irishisms that popped up in Skin Deep. That said, I don’t think someone from outside the country would have difficulty understanding them; Liz Nugent explains them with a light touch – so the reader doesn’t feel ‘educated’ or ‘informed’; merely ‘told’.

This is a rich book that starts at the scene of a crime, before taking us back to the childhood of the criminal. We get the benefit of a few different points of view to explain some of the plot, but the main voice is that of the killer.

As I hurtled towards the end, my screen-swiping (I read it on Kindle) sped up with the pace of the brilliant writing. The final chapter stunned me with unexpected twists that hadn’t been foreshadowed, but were still plausible.

I’ve read ‘Lying in Wait’ and ‘Unraveling Oliver’ and I enjoyed them; but ‘Skin Deep‘ is a huge step up in both form and skill. It’s a definite four-star read – and I can’t wait to get my hands on her next book. 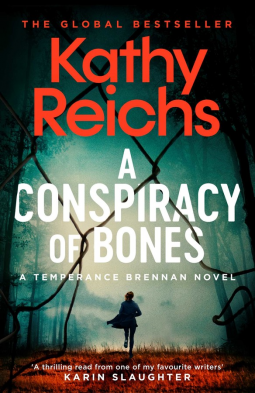 Kathy Reichs is back with another Temperance Brennan novel. I’ve read quite a few of these books (though not all of them) and I’m pretty certain I’ve read them out of sequence, which has never harmed my enjoyment:  Kathy Reichs fills in the necessary back story, so each can be enjoyed in isolation from its library-mates. I was delighted to have been forwarded a copy in advance of publication, because I’ve enjoyed Dr Brennan’s company every time we’ve met.

‘A Conspiracy of Bones’ did not disappoint. I was pretty sure I knew what to expect; Temperance Brennan using her skills, experiences, and expertise – and pulling in favours across departments and disciplines – to solve a grisly murder or two. I got what I expected, and then some. I thought I knew the ‘formula’ when I settled down to read the book. I was pleasantly surprised, however. Yes, there was a body. Yes there were grisly details, and Dr Brennan used all she had – including her relationships with law enforcement, and other professionals – to bring us answers about who the body was, and how, and why, it ended up where it did. There were, however, quite a few surprises that I felt were brave choices for the writer.

I enjoyed how Reichs gives us information about the technicalities of law enforcement, forensic anthropology, and the Dark Web without being patronising. The details are woven into the narrative naturally, and fairly seamlessly. That said, I found the presentation of the back-story a bit clunky and confusing. I’ve read authors do similar with a lighter touch – Patricia Cornwell’s ‘Scarpetta’ books, for example.

The ‘Bones’ series treads the thin line between being suitably detailed, and gratuitously gruesome, which I appreciate: I like to read books written by people who assume that their readers have some basic knowledge (and know how to look up what we’re unsure of). Kathy Reichs is a wonderful writer, with many gems such as ‘Unger was built along the lines of dental floss – tall and skeletal, with skin the color of a toilet bowl…’ littered thoughout the text. I will admit, however, that her penchant for eschewing full sentences during the narrative – as opposed to in direct speech – irks me.

Finally, when the loose ends have been tied up and we have a resolution, and we think the book is finished, there is more. In a poignant afterward, Kathy Reichs shares some of her own recent, personal history that has informed and shaped some of the challenges faced by Dr Brennan in ‘A Conspiracy of Bones’.  There is a delicate intimacy to this sharing which made this reader feel oddly privileged. The final brave choice by the writer in this novel. 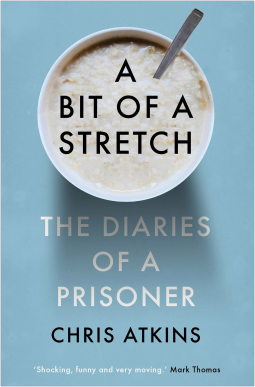 Chris Atkins’s ‘A Bit of A Stretch’ is an account of his two and a half years in prison, and it’s a compelling read (I read it in one sitting). Acknowledging his privilege right off the bat, Chris brings us through his experiences of the British judicial and prison systems with a sense of humour, and a gift for insightful observation and empathy that he clearly honed during his years working in film.

Managing to strike a balance between pathos and humour (I actually laughed out loud several times while reading this book), this memoir brings the reader on a journey that offers a rare glimpse of prison life in modern England. Chris Atkins has the storyteller’s gift of understanding what images and anecdotes will land with an audience and we readers benefit from that gift.

‘Orange Is The New Black’ this book isn’t – there is no glamour, no reinforcing of accepted stereotypes, and much insight into the banal everyday of prison life.

‘A Big Of A Stretch’ by Chris Atkins is a must read for anyone interested in prisons, prison reform, and / or a cracking good book.