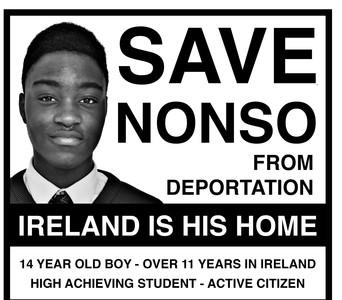 Yesterday, this petition popped up on my timeline. It details the plight of a young man who is the same age as my youngest daughter (14). Please bear in mind that I know nothing about this family, save what I read on the petition page, and saw on an RTE news-clip.

From what I can glean from those sources, Nonso Muojeke has lived in Ireland since he was two years old. His mother was widowed, then ‘claimed by’ her dead husband’s brother. According to Mrs Muojeke, he – and the rest of her in-laws – treated her horrifically. She fled to Ireland, from Nigeria, with her two children, arriving in 2007.

The family was refused asylum in 2009, and has lived in a terrible legal limbo since. Nine years is a long time to live, with no security, with no idea whether or not you’ll be allowed to stay indefinitely. Not knowing if you might be taken from your home and sent back to a place of danger. I can only imagine what that does to a person’s mental health.

For me, though, the person at the centre of this tale is not Nonso himself, but his mother.  This is a woman who was treated horrifically by her in-laws after she was widowed and ‘taken’ by her dead husband’s brother, as his wife. She gathered the courage and the internal, and external, resources to leave the house, the village, the country, with her two young children. She arrived in Ireland – a place she knew little, or nothing, about and has stayed here, in spite of her case being fouled up by her solicitor (solicitors can pretty much do what they like in this country, by the way – without fear of censure). She has managed to provide for herself and her family without drawing from the public purse in terms of receiving a cent in social welfare payments, or getting healthcare for herself and her children.

She has held herself, and her family, together all this time. She has helped them to become part of the community where they live. She has kept her boys fed, warm, educated, housed, loved. And safe. She has kept them safe.

Now, however, the family is at risk of being returned to Nigeria. To a place where Mrs Muojeke was abused and degraded. To a place where the boys don’t feel a part of the society (because they never have been), to a place where the boys’ mental health would be at risk. None of this appears to matter to the Department of Justice, or the Minister for Justice. What this tells me is that returning a woman to a place where she is seen as nothing other than chattel – where she can be ‘inherited’ like a piece of furniture – is not something that this government objects to. This government is fine with the notion of a man ‘claiming’ his dead brother’s wife for himself (and then abusing her). This government is clearly absolutely fine with the idea of a man abusing a woman. But then, we know that already.

We may have voted to repeal the 8th Amendment to the Irish Constitution, but we haven’t yet managed to repeal patriarchy.