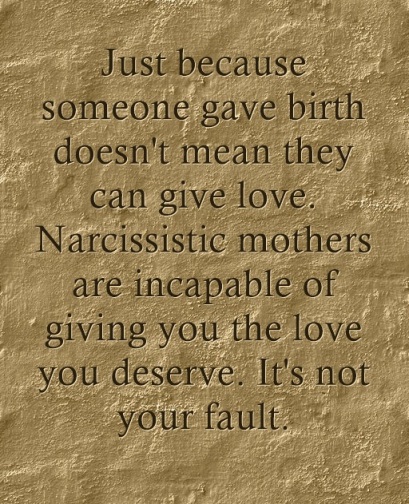 Today is a tough day for many of my American friends. It’s Mothers’ Day over that side of the Atlantic, and that’s not all sweetness and light for everyone. Aside altogether, from women who have lost their mothers to illness, there are many who were never mothered to begin with.

I believe that the last social taboo surrounds abusive mothers. The dominant narrative is that mothers are all-loving, all-giving, self-sacrificing fonts of love for all their offspring. To challenge that account of mothers is, to many, worse than blasphemy. This has the effect of silencing so many of us who survived our mothers, and who want to share our experiences to find other survivors and develop a community that understands, and supports us.

I remember, about eight years ago, I decided to cut ties with my toxic, abusive family (my father and two eldest brothers sexually abused me my entire childhood, my other brothers, my sister – who was also raped by one of my brothers – and their partners, choose to support my eldest brothers), and a friend of mine said ‘Well, yes, cut ties with all of them. Except your mum. You can’t not talk to your mum. Because….well, she’s you mum.’  It’s so difficult for people who were raised by someone who loved them – however imperfectly – that those of us who never experienced maternal love actually exist.

In the month or so since I started my secret Facebook Page for Daughters of Narcissistic Mothers*, I have been amazed, horrified, and comforted by the amount of women who share my grief at having been raised by at least one narcissist.  The last time I spoke to my mother was at the end of 2016. It was a surreal conversation, in many ways, and if I hadn’t recorded it, it would be hard to believe some of the things that came out of her mouth actually did. Most notable was her response when I asked her why she had never told my sisters-in-law, that I had been raped by my brothers.

‘Not even to protect your grandchildren?’ I asked.

‘It’s not my place,’ she repeated.

To reveal that I was telling the absolute, irrefutable, empirical, truth about my brothers was too much of a challenge to her view of herself. She couldn’t possibly be the person she wants the world to believe she is if she admitted that her sons raped her daughter, and she chose to support her boys instead of her girl.  Mind you, this is the same woman who refused to let me be taken into care as a teenager because she was ‘worried about what the neighbours would say.’ When I confronted her with this piece of information (gleaned as the result of an FOI request), she nodded and said categorically and with a tone of extreme rightousness ‘Yes, yes, I did say that.’ Only a narcissist could possibly utter such a response.

‘They fuck you up, your mum and dad.

They may not mean to, but they do.’

In the case of narcissistic mothers, however, they don’t actually care about the ways in which they damage their children. They feel no remorse, accept no responsibility, offer no apologies, and care only about how they are perceived by people they don’t live with. If you suspect your mother might be a narcissist, this article provides a short list of things that others do, that narcissists will never do.

Finally,  this piece, from Dr Karyl McBride, offers ten tips for coping with Mothers’ Day for adult children of narcissistic mothers. Mind yourself.

*If you’d like to join, please send me an email, a DM on Twitter, or drop a line in comments here. Comments are moderated before posting, so you won’t be revealing more than you’d care to share with the world at large.

3 thoughts on “Not All Mothers Love”